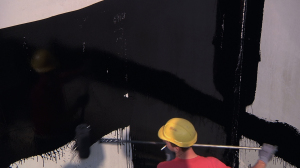 (…) In addition, images of (architectural) designs for a building are superimposed over designs for a society. Ambivalent perspectives collide with security, freedom, as well as being constrained/ stopped. In doing so, Juri Schaden refutes the implicit logic of detention: he leaves the sovereignty with the beholder and provides sufficient space to sound out one’s own position on the theme at hand. In keeping with the title, this is not mediated as a single, linear, and unalterable narrative, but instead, as a consistently fraying essayistic draft: about the transformation of post-industrial social and working life; about coming and going, whether of a voluntary or state-ordained—at times violent—nature; about supposed fact, which with Schaden, generally presents itself as something that can be seen as potentially fictional.
(Sebastian Höglinger)
sixpack film